The half-marathon mark was quickly approaching. Only half-way? You have got to be kidding me. I wasn’t in pain yet physically, just tired and not caring. I searched inside of me for something profound to drive me on. Nothing came. I’m in trouble, I thought.

So, since I couldn’t pull it together, I reached for some outside inspiration. I remembered the words of the man from Portland. I recalled what my doctor had told me. I thought of what friends have been telling me all my life. Basically, if you don’t slow down and start enjoying life, you’re just going to drive yourself to the ground.

That’s right, and sometimes we do go through life running even when we would rather be walking. We can get so focused on the goal that we miss everything we pass along the way. Oh, another thing my doctor said? That I needed a week-long vacation, away from the pressures of life and work. I haven’t taken more than a weekend away this year. Still, it seems impossible. I don’t have time! Truly, there are things we learn about ourselves during a marathon that we don’t learn anywhere else. There are things that confront us during those hours that we cannot escape.

So this was all starting to feel quite negative, and I still had half a marathon to finish! At this point, my pace was still on track for the time I wanted, but the thought of keeping it up seemed impossible. The initial excitement seemed to have died down a bit around me as well. I was passing people who were already walking. I found my earphones and put them in. The music gave me a little boost. I thought, what the heck, I’m just going to enjoy this marathon like everyone seems to say I should.

I didn’t care about time anymore, I decided to just to glide through to 30k. I wasn’t going to use any more mental energy to calculate my pace and my predicted pace. I even started to walk through the refreshment stations and enjoy a cup of hot sweet tea instead of simply spilling it all over myself. I was still mentally a bit checked-out, and occasionally I had extreme thoughts like, “I have six hours to finish this thing, I wonder if I would still make it in time even if I walked the rest of the way?”

After 30k, I started taking short walking breaks (1-2 minutes) every 10 minutes. Whatever, I didn’t care. Then, something crazy happened. I realized I was at 33k already and I looked at my watch again. It seemed that even with a conservative pace from there on out, I might still be able to finish a few minutes faster than I had in May. This gave me a slight bit of motivation, and although I continued to take walking breaks, I was more motivated to keep a good pace for 8-9 minutes at a time.

Finally, I reached 39k and mustered the strength for a little pep talk that consisted of one word, “BURN!!!!” So I did, I started running again and didn’t stop until I reached the finish line. I passed so many people who were walking during these last kilometers, including the four men in purple shirts, who were clearly struggling by this point. I was glad I still had something left to give, even though perhaps earlier I hadn’t given all I could. Then I started counting down the minutes to myself, knowing when I had only 14 minutes left, ten, five, two… From kilometer 40, I knew when I would finish, and I came in right on the money. WAAM! Five minutes faster than in May! How did that happen??

And then it wasn’t pretty. My head was not happy. I started walking again and realized I had a debilitating pain in my right hip, so instead of walking I was limping. I very nearly burst into tears, but then again, I didn’t care enough, even to cry. I mostly just felt awful. I wanted to get back to my room. I had to get there. The sooner, the better.

My French friends finished before me, but waited in the arrival area for me to show up. I was so touched by this gesture! We were all happy to be done, and we all felt completely spent. We parted ways and I had to find the bag that I had checked earlier. I asked someone and he pointed to some tents that I could barely see. “500 meters,” he said. “No!!! I mean… thanks.” And I limped over there, stopped to take a couple of pictures and then collected my bag.

The next mission was to find a taxi. I didn’t care how frivolous it was at this point, I knew I needed to get back as soon as possible. And by now my hotel was another 2.5 kilometers away. I spent about 10 minutes trying to communicate with Italian volunteers about how to get a taxi. Apparently, it was all very complicated because so many roads were still blocked off for the race. I was getting nowhere. Walking to an accessible taxi station would have meant walking too far for comfort in the other direction. The streets were also packed with people, so I wasn’t sure how a taxi would get through. My head started to swim. I stopped and leaned against a post. Then I heard someone next to me saying, “tutto bene?” I nodded my head, I shook my head, and then I signaled that I was dizzy. Finally, someone said my best bet was to just walk to my hotel. But I caaaan’t!!!!

Still, I did. I limped all the way back. And yes, it took forever. I was hungry. I was tired. I was hurting. I was also nauseated. I arrived next door to my hotel and knew that once I went up I might not be down again for a while. I needed some kind of fuel, so I stepped into a gelato store for their “Thanksgiving” special (pumpkin-flavored gelato), one of the few things that was at all appealing in that moment. They served me, congratulated me on the race, and then I sat down for a few minutes. I enjoyed a little bit of the gelato, but then I started seeing zigzagged lights, and knew I had to get to my room subito. I took the migraine medication that I had with me, threw out the rest of the gelato and hurried on to my hotel. But the time I reached my room, I couldn’t see clearly anymore. I was conscious enough to change into dry clothes but the next few hours were a blur. To be honest, it was also a little scary.

So, this one didn’t end so well. Maybe I’m not made for marathons? Maybe not, who knows. But I can’t imagine that I will stop here, especially since I’m already registered for the Paris Marathon in April. If I’m going to quit, I simply have to quit on a better note than this.

Post-race, is it possible to still be thankful? Yes, I believe so, if I choose to be. I’m thankful I made it to the start. I’m thankful for my French friends, for my running group in Paris, for the spectators, the volunteers. I’m thankful for the journey. This difficult experience reminded me of more difficult things that I have suffered in the past. I’m thankful to have finished, to have made it back to my hotel safely. I’m thankful for the reminder of the fragility of life. I later learned that a 38-year-old man had collapsed and died one kilometer before the finish line. When a fellow runner dies in a race like this, it affects all the rest of us, too. We can’t help but think, “that could have been me.” I hurt for his family. And I am thankful for life.

Still, I do need to cool it now for a while. And as a friend corrected me, “you must not just try to rest, you must actually rest!”

Well, at this point, I’m so shot that by default I have no other choice! 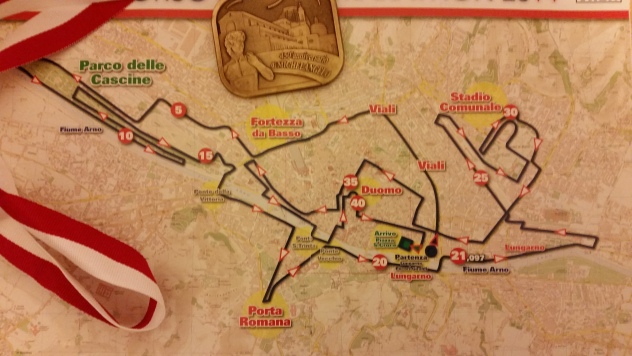